With the recent election where a couple of states have voted to legalize marijuana, I thought I'd blog about the history of hemp (which includes the marijuana variety) in Virginia. In the early 1600s, the colony was on the verge of failing to make a profit until John Rolfe married Pocahontas to gain the secret of growing tobacco. But hemp, often overlooked in history books due to its bad reputation in modern times, was another important crop.

In 1611, Sir Thomas Dale introduced hemp to Virginia. The English navy depended on the crop, but the demand was far greater than the country was able to produce. Hemp was used for paper, cordage, fiber for linen, and of course, medicinal uses. The First Virginia Assembly encouraged colonists to grow hemp, and they received favorable reports from England on the superiority of the colony's crop.

The early years were hampered by shortage of seed and lack of skilled labor to separate the fiber from the woody part of the stalks to make cordage. In 1646, the Virginia Assembly commissioned houses to be built where poor children were taught to card, knit, and spin, thus helping the manufacture of linen. In 1665, the removal of import duties to England stimulated production further

Less than ten years later, laws were enacted for each county to purchase and distribute hemp seed. Failure to do so resulted in fines. In spite of these encouragements, during the 17th century, hemp production tended to remain limited to self-sufficient farms, never really competing with tobacco until well into the 18th century, where the practice became so common that even founding fathers George Washington and Thomas Jefferson grew hemp.

Hemp's importance went beyond cordage and fiber. Both industrial hemp and what's known today as marijuana are classified as Cannabis sativa, a species with hundreds of varieties. According to some sources, many varieties that were grown in North America have been lost. The East Indian variety (marijuana) of hemp was known as "bangue" in the 17th century from the Hindi word "bhang."

Culpeper's Complete Herb first published in 1653, states that hemp, "is so well known to every good housewife in the country, that I shall not need to write any description of it." Besides the well known modern use of pain relief, Culpeper advised the different portions of the plant to be used for various ailments, such as jaundice, digestive disorders, killing worms, flushing earwigs from the ear canal, and burns.

While hemp has become much maligned in recent years, Virginians of the 17th and 18th centuries held no reservations for making use of its quality fiber or legitimate medical uses.

Herndon,George Melvin, "The story of hemp in colonial Virginia." Doctor of Philosophy dissertation, University of Virginia, 1959.

Culpeper, Nicholas. Culpeper's Complete Herbal
Posted by Kim Murphy at 8:30 AM 4 comments: Links to this post 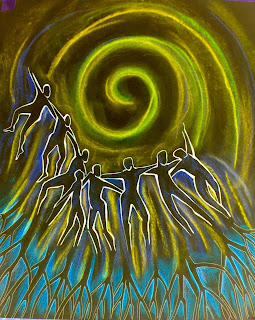 Outside the cold darkness gathers early
Winter solstice brings the longest night
Then ancient people would huddle
Close together around the fire
Partaking in sacred rituals to call back the Sun
Seeking protection from a superstitious fear
Warm days would not return
The cold dark would only deepen
Bringing death
Staring out the window at the gathering gloom I catch a fragmentary glimpse of an urban fox, a vague shape slipping through grey shadows. Suddenly to be outside breathing clear cold air feels like the only bearable option. The intensity of my desire startles me out of my drifting reverie and my feet are moving towards the door before the next breath comes and I am outside, free.
Teetering on the edge of the wooden deck I inhale sharply. In the sky appears a golden green spiral calling to all of Mother Earth's kindred spirits to unite and dance together.
In my mind's eye my feet are carrying me soaring over white drifts, ducking under low hanging branches, around the quiet sentinel trees, through the gate at the wild end of the garden. Then I know, I ken, that I have entered another level of perception… what is known in shamanic circles as non- ordinary reality…
Inside my heart opens
My inner eye perceives
Portals to rich adventures
Animal instincts react
With keen pleasure
Where shall we go from here?

About "Once Upon A Time"

I'd like to write about what is currently one of my favorite TV programs, “Once Upon a Time.” If you know nothing about the show and it's fractured and delightful spin on multiple fairytales, I realize it's not immediately apparent why this story is appropriate for the usual content of this blog. So please allow me to explain.

Until now, we seem to have had only two versions of fairytale story telling. Either you went back to the original Brothers Grimm et al – dark yarns with sinister and gory events that give us pause about how they were ever considered appropriate for children - or there's the sanitized PG Disney spin with passive and often rather vapid princess heroines. So unless your taste runs to the macabre, I'm not sure either extreme is really appealing.

So why do I think “Once Upon a Time” is true Crone Henge material? First and foremost, we get true heroines – strong, intelligent, beautiful and feminine women who are perfectly capable of taking care of themselves – and kicking butt – and are not afraid to do so.
Second, it's so great to watch storylines where the men and the women are true partners – both sexes are equally comfortable supporting and helping each other. No “helpless little woman” banter between the sexes or fainting damsels in distress here. And finally, all the characters in this story are fully developed. They are all three-dimensional, flawed and sympathetic humans, regardless of whether or not they are heroes or villains.

A little bit about the premise behind this tale. There are two worlds in this version. We have fairytale land and then there's a little town in our present day called “Storybrooke, Maine.” 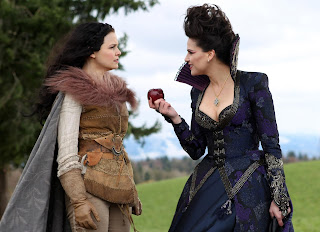 Once upon a time, Snow White got her potential stepmother really pissed. We won't go into details about the unintentional betrayal (because I'd be here all night writing if I revealed everyone's backstory). But suffice it to say that Regina (get it? Latin for Queen) was once a nice young woman who lost her true love in spite of Snow's best attempts otherwise. So on one level we can sympathize with the now Evil Queen and understand why she turned against Snow White. And there are times when you actually like and root for her.

So Snow has to flee into the forest and turn outlaw to survive. Yes, she meets up with seven little men who would otherwise be miners but she doesn't spend her time keeping house and cooking for them. While she's out in the woods, acting like a female Robin Hood and waiting to ambush the Queen, she runs into the man who is, of course, her true love. But he, through his own misadventures, is really a lowly shepherd and not a true prince – who was recruited to kill a dragon and has been blackmailed into agreeing to marry the local princess to save a neighboring kingdom. 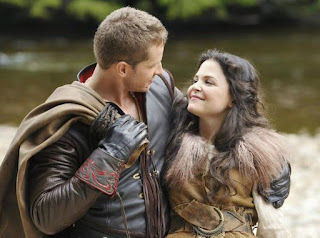 Still with me? It's complicated, but it's delightful! Anyway, back to the dual storylines.
The present day comes into the picture because when the story begins, Snow and Charming (Snow's sarcastic nickname for James, her prince) have married and Snow White is pregnant. Queen Regina is in revenge mode and carries out her curse – she transports almost everyone in Fairytale land to a world far away. That world is ours – where Regina is the mayor of Storybrooke and no one who lives there remembers who they once were or who they loved.

How to break the curse? At the last possible moment, Snow and Charming put their newborn daughter into a magic tree that transports her to our world. And while Storybrooke is suspended in time for twenty eight years, Snow and Charming's daughter, Emma, grows up in foster care, and has a rough and tumble life. On the night of her twenty eighth birthday, Emma comes home to her lonely Boston apartment, lights a single candle on a cupcake and wishes she didn't have to be alone. The doorbell rings, and a ten year old boy stands on her doorstep. He informs her he's Henry, the baby she put up for adoption years ago. 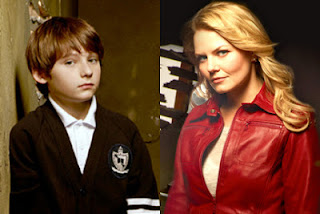 Henry will explain that he was adopted by Regina, the mayor of Storybrooke, and eventually he will convince Emma that Regina's curse is real and that Emma is the woman to break the spell and reunite with her (still youthful under enchantment) parents. And yes, Emma will have to single-handedly fight a dragon and go on a quest with her mother to get back home and defeat yet another Evil Queen. All a very Crone Henge appropriate tale and one my daughter and I are enjoying every minute watching. We can't wait for the second half of season two to start this month. 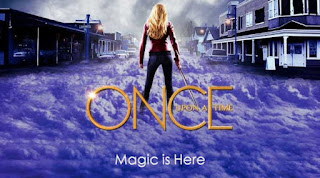 Posted by Roberta Marley at 8:01 PM No comments: Links to this post