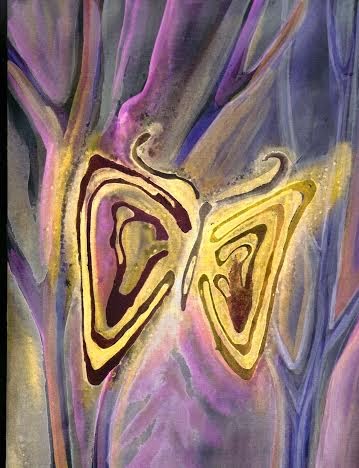 As January turns into February we are invited to turn our thoughts to the Gaelic festival of Imbolc / Brigid's Day / Candle mas. Halfway between Winter solstice and the spring equinox it's a time to remember that deep below the snows and frost of winter there are stirrings of irrepressible energies.
We can notice the days getting longer, and the sun when it shines has a warmer touch. In the farmlands the sheep are beginning to birth their lambs and the rich milk is flowing… hence the term Imbolc for festival for lactating sheep. This marks the beginning of the Maiden segment of the Maiden- Mother- Crone times as the Earth prepares for renewal and transformation…

Outside in the dark night
There's a fierce north wind blowing


I turn tighter into the brittle nest, my protective cocoon
Nevertheless there are stirrings in the great ground around me
Fresh Life-force is slowly seeping upwards
Insistent as the sweet sap of the maple trees
Will they ever lose their hope for new beginnings?
I crave glowing colours; deep flowing mysterious purple
Intense bursts of golden yellow, incandescent turquoise
These winter-tired bones dream of cracking open, releasing luscious green
These ears have heard enough of frigid silence
I am turning slowly clockwise
Tuning into spring vibrations deep down under sodden snow
Calling for great metamorphosis … Nature renewing life once more
I turn again … persistent
Posted by NJ Kelly at 9:48 AM 1 comment: Links to this post 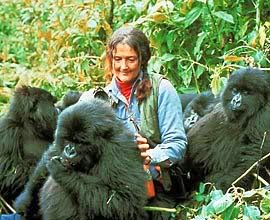 A Google doodle yesterday told me that January 16th was Dian Fossey's birthday, and after a short trip around the web to brush up on her bio, I thought I'd add her to our list of famous January Crones. Mythical Crones often come with non-human companions; the old woman and her cat, burned together at the stake, are a tragic part of Herstory.

Born in 1932, Fossey was only three when her father, a heavy drinker, left the family. A few years later her mother remarried, but the new stepfather was rigid and unloving. Until she was ten, Dian took all of her meals in the kitchen with the housekeeper. Early on she knew she wanted to be a vet--animals simply engaged her more than people--and she was already a gifted equestrian. Her stepfather opposed her plan, but Dian plowed ahead anyway, working different low wage jobs to earn tuition. Ultimately, the mathematics portion of the curriculum defeated her, and she ended taking a degree in occupational therapy.

She took a job as director at the Kosair Crippled Children's Hospital in Kentucky, where she worked with disabled and autistic children, finding connections others could not with the later. After work, she lived on a farm, in a time of real happiness. Here she was closer to the rhythm dictated by the needs of the animals she cared for and where she could ride her beloved horses.

And here I'll end the biography, as the rest is better known, especially her life in Africa, where she was first an observer, and then a friend and guardian to a family of shy, gentle, endangered mountain gorillas. Before yesterday, I had never known much about her childhood, but it doesn't take a psychologist to understand reasons for the trajectory of Dian Fossey's life. She'd had a hard childhood, abandoned by both father and then emotionally by a mother who cared more for a new husband than for her own child. Looking for a family who would not disappoint, Dian arrived in Africa more than open to the idea of a non-human one.

"I feel more comfortable with gorillas than people. I can anticipate what a gorilla's going to do, and they are purely motivated." ~~ Dian Fossey

Gorilla families will fight to the death to protect their infants, so when hunters take a baby, they usually kill all the adults, too. The killing of Digit, a young male gorilla whom she'd loved since his infancy, as well as other members of his family during such a raid, sent her off on crusade--against the colluding park rangers, against the villagers who cut trees and grazed cattle inside the park, and against the poachers, who could make as much as $200,000 for the head of a gorilla. A middle-aged woman alone in a volcanic jungle, almost single-handedly, she tried increasingly desperate and extra-legal measures to protect her adopted family and their wild home.

Since her unsolved murder, in 1985, which might have been politically motivated, some, (predictably, a writer at The Wall Street Journal) have done their best to disparage at Dian's reputation and belittle her. "Racist" and "alcoholic" are among the epithets, but I wonder who among us whose family has been murdered and whose land has been invaded and ruined, would not be full of despair, rage and a passionate desire for revenge upon those responsible?

The mountain gorillas remain in danger of extinction, more so than in Fossey's day, when she, out of her own pocket, paid to protect them from poachers and corrupt politicians. She raised awareness of the plight of these close primate cousins, whose DNA is 98% similar to ours and whose social organization, individuality, and emotions so much mirror our own.

“When you realize the value of all life, you dwell less on what is past and concentrate more on the preservation of the future.”

Posted by Juliet Waldron at 10:37 AM 4 comments: Links to this post

Posted by Roberta Marley at 12:57 AM No comments: Links to this post

Hagar in the Wilderness 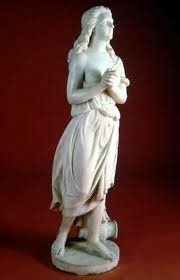 Hagar in the Wilderness was sculpted in 1868 in Rome by Edmonia Lewis, a woman of African and Native American heritage. What did it mean to her to sculpt the figure of the mother of Ishmael with white features, flowing hair, calmly folded hands. It was probably necessary to make a sale, but surely she did not picture Hagar this way in her imagination. Hagar loomed large in the literature of abolitionists of the time. Were all Biblical characters – even the darkest servants of Egypt – Europeans in the “civilized Western” mind? Were all women important only as they were related to men?
Hagar was the mother of Ishmael - the son that Abram feared he would never have; the son that Sarai was willing to allow, until she had her own miraculous child. Hagar was Sarai’s handmaiden, property, her slave. Sarai gave Hagar to Abram as a gift, his concubine or even a second wife. Second wives were nothing new. Certainly they knew enough not to make the first wife angry. Not so for Hagar. Did she think that her beauty and sexuality, once initiated, would make her Sarai’s superior in Abram’s eyes? As a slave of Egypt, did Hagar believe she had earned her freedom? With the new security of her position, did she begin to delight in her own beauty and dance with a lighter step, or smile from mischievous eyes? Did she truly despise Sarai? Or was that just what Sarai believed?
Oh, the jealousy of women. In what desert, in what foreign lonely country would I hand a beautiful young woman to my husband? In what fevered mind might I consider the gift , if pleasing to him, pleasing to me? What woman can welcome her husband’s second wife into her circle? And in how many homes are the sons of other wives loved by their step-mothers, as if the boys are their own?
Hagar ran into the desert twice to escape the angry Sarai. The first time she was sent back by God to obey her mistress -  with the promise of His protection. The second time, Hagar was fleeing with her son Ishmael, and God saved her and the son who would sire 12 princes. The Bible records their names, but what became of Hagar?
In one of many stories of Islamic pre-history, Hagar lived until she was 90. She was known for her great beauty and remained the beloved of Abraham, who visited her daily in Mecca on the winged horse al-Burāq (Lindsay). Ishmael was the forebear of Muhammad, so she is clearly of greater importance to the people of Islam than to the descendants of Isaac, and the writer of the Bible.
But what is the importance of these ancient women of the Bible today? Isn’t theirs the same story in every time? There is one man and two women. He doesn’t have to take a stand for either one. He just turns them loose on each other. Abram loves both his sons – Ishmael and Isaac are both his gifts from God. But the women are vessels. Like the empty jar at Hagar’s feet in the wilderness, they fall away from the scene.
It is up to us to live a new story and create a new history for women of the future. Will we tell a story about men and their sons and their spiteful, bitter wives? Or will we tell a story about wives and mothers who bring their sons back from the wilderness? Hagar and Sarai mothered many princes, tribes and nations. God chose them as well. 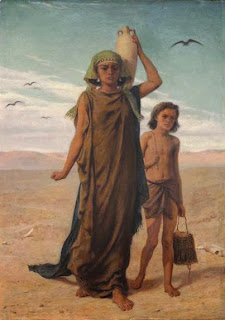 Posted by Unknown at 1:33 PM 2 comments: Links to this post