There I was, lost and adrift again
My musing dreaming creative minds-eye
Free floating in bright autumn skies
Playing in the drifting shifting patterns
Scattering wind-chased clouds
Layers over layers, forms over forms
Shape-shifting
Balancing on the edge of non-ordinary reality
I fell, swooping into wonder "What if..?"
Crone identity popularly known as hag, worthless and discarded
Morphed… belief can make such things so
Into secret mysterious power to live disguised
(I'm thinking here of Wonder-woman!)
Camouflaged like an urban fox
Dining well on silly city mice
These thoughts amuse me, shuffling along with my walking stick
Ridiculously slow, my grey head bent in concentration
While all the while within, Life-force energy burns bright
Tonight under the silver moon what magic will we brew?
What miracles cook up in our colourful creative cauldron? 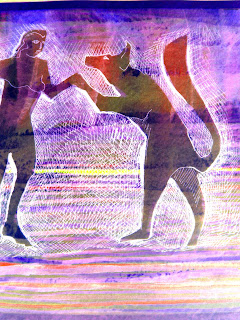 Posted by NJ Kelly at 1:07 PM 3 comments: Links to this post

Sister, Where Art Thou? 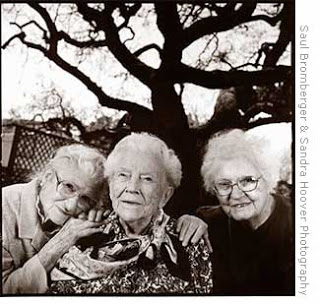 As Halloween approaches, I find myself thinking about the Weird Sisters of Shakespeare’s Macbeth. These bearded women had quite a jolly time with the ancient Scottish Lord. Their riddles, or lies that sounded like truths told to give men hope and win them to their own selfish  harms, must have been presented very convincingly. If Macbeth couldn’t figure it out alone, he had plenty of help from Banquo. But they were such brats. They blamed their testosterone-charged mayhem on a few old ladies.

That isn’t the only reason they are on my mind. I recently heard a piece of writing that mirrored my own thoughts about the healers and Crones of my imagination. These are old women who have learned to look ahead, remember cures and the plants and the recipes that provide them. These are women who have been gardening and mending and nurturing their families and their friends’ families for decades. They know who has been born to whom, and where more than a few bodies have been buried. They have heard the secrets, the fears, the wants and the needs of their villagers for generations – from their mothers and grandmothers and maiden aunts.

So they are powerful -- not in any physical sense of the word, but that is what makes them more frightening than a typical enemy for the power-brokers of the time. These women have the hearts and the loyalties of their neighbors. They are not to be taken lightly, and as older women they have very little to lose. Besides which the older women become, the less time they have for the trivial and never-ending bickering of the young. They don’t suffer fools – at all! And they aren’t afraid to say so.

That is why I think about the secret, black and midnight hags who meet these silly soldier-boys on the heath. I believe the 'witches'  burned at the stake in the 1600's had value and purpose. They are not caricatures on brooms. They are enjoying their last years while sharing their wisdom. There they are, picking their herbs, rhyming a few charms, and cataloging their aches and pains, when two sweaty, bloody young men show up, talking about their killing and how they will gain from it. They tell these grandmothers to stop what they are doing and give them some attention. How many times had the women had to do that in the course of their long lives? So the fun begins. The grannies probably start out with a few harmless puns, seeing how well they can confuse the strutting cock o’ the walks. And then the old friends continue, egging each other on and one-upping each other.  It must have been a source of laughter for the old biddies for days!

Until  they find out how well – or ill - it has worked. The words take on lives of their own, and the game loses its levity. Fair has become foul, and they have a confirmed mass-murderer on their consciences. He sorely lacks any subtlety of mind and hasn’t even a shred of human compassion. It is time to scare the britches off the bugger and leave him to pay for what he has done. So next thing they know, they are bubbling, toil and troubling with a purpose. And that is when she catches them.

Witch number 1’s favorite grand-daughter comes traipsing along and herds them home. “Mom, they were at it again!” she informs number one’s daughter.

Witch number 2’s daughter comes from her house and hurries across the lane.“What did you get up to this time?” she demands, one hand on her hip. “Was it newts in the bucket or mice in your pockets? I swear I can’t let you out of my sight. You’re turning into a regular mud-grubber.”

Then it is Witch number 3’s turn to be chastised. “Auntie, all the good you do with your cures will be for naught. The neighbors will see you muttering about nothing, and then we won’t sell a posset for a pin-cushion. And how will we find money to eat then?” Noting her dearest Aunt’s sad face, she relents. “Ah, don’t fret now. Let’s get you home for some tea and start our supper. We have a little beef and some nice cabbages in the larder. Nobody noticed your silliness today.”

And as the younger women turn toward their homes, a short conversation takes place behind them.
“When shall we three meet again?” whispers Sister 1.
“Not till after breakfast tomorrow, I guess.” says Sister 2.
“ Oh, bother,” sighs Sister 3, “I wish they weren’t so set on taking care of us.”
Then each lays a choppy finger on her lip, nods to her dearest friends, and limps her way home.
Posted by Unknown at 7:26 PM No comments: Links to this post

Posted by Roberta Marley at 1:33 PM No comments: Links to this post