~When the stars align correctly, Cronehenge receives a message from OrB Weaver.~


***
﻿
PINK SATIN PLATFORM HEELS
ON THE SIDE OF THE ROAD
It was a very long winter in Southern Delaware.  So, its early summer and I finally get out for a drive early one morning with no specific destination in mind: just to relish in the cool morning air after days of wet heat.  I leave the house at a relatively early (for me) hour, around 7 a.m. to beat the heat.  And oh, it’s Sunday.
This is rural Southern Delaware in an area commonly known as Long Neck.  It is half way between Millsboro to the West, and Lewes to the East.  Now, I very rarely have the need (nor the temper for the tourists, those morons) to go to Lewes, and so my primary route of travel is on the same road, but in the opposite direction.  State Route 24 runs from Lewes to Millsboro, where it crosses Route 113 and becomes something else on the other side at some point.  Three years and I have not quite figured out the country roads.  Anyway, I run the miles mostly between Long Neck and Millsboro to 113 for doctors, my library, Lowes, Fulton Bank and lots of family restaurants.  It’s the best way to get from one side of the state to the other, but ... it’s two lanes, mostly passing restricted (which stops no one), but with quite a few areas that allow passing for brief sections.  As a result, it has the highest fatality rate of any Delaware state road.  That’s quite an accomplishment.  Misplaced, but notable.
On this particular morning there was quite a bit of fairy fog lying in the low field areas and in low-lying woodland.  The sun was shining, reflecting off the mist, and everything was covered in soft sparkles of light.  Just as I move into a curve into an area of woods, on the side of the road I see something ...  no, two things ... lying there, obviously discarded from a vehicle, two platform high heel satin strap pumps in what the ‘50s used
to be called “Titty Pink,” and omigod, it was a note from the Cosmos. 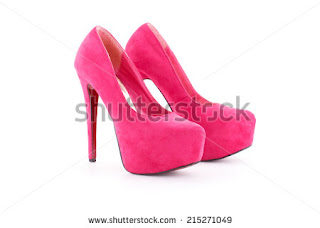 First and foremost, now I know there is at least one other person as totally spontaneous and psychotic as I am.  Hooray for my side.  Bless you sister, I wish I knew who you are.  But it will have to be enough to know that at least one time, in an absolute fury of independence, I can see  you in my  mind’s eye, a word, a look, a ‘tsk’ pointed towards you, you took OFF those ComeFuckMe shoes and heaved’em out a car window, because you had come to the end of the line of ridicule, abuse, torture, hypocrisy, or because the wedding was such a flop, you  actually felt some blame, so you tossed them to restore some balance in your universe.  I threw my shoes out the car window at 70 miles per hour, bright forest green satin, the guy behind me in the semi was surely waiting for the body.  But that was my freedom gesture.  And shoes make a statement.  Shoes are like ... “I’d rather go barefoot than walk one more foot in these shoes that I wouldn’t wear if it weren’t for you ...”


So to say I had an immediate kinship with the former owner of those magnificent shoes (think Joan Crawford, think early Bette Davis, or Lana Turner), because shoes say it all.  And she was certainly giving some man a big  FUCK YOU.  The only reason we wear those tortuous designs is because it is part of female DNA, programmed to believe that shoes actually sell sex.  And, yes.  They do.  And we allow it to continue, because even if we accept it’s bad for us, it’s always been fun to be bad.


You go, girl, you of the pink platforms.  I almost went back and retrieved them, but I thought, no, that’s none of my business and I shouldn’t interfere in what was so obviously a very strong signal to someone.  So I left them there in the hope that everyone will wonder and everyone will have a story, but you have sent a clear message of being just plain fed up.  You get mad enough, anything’s possible.  Even something good.


Or, of course, you might have just hated the shoes.