To A Modern Thoth 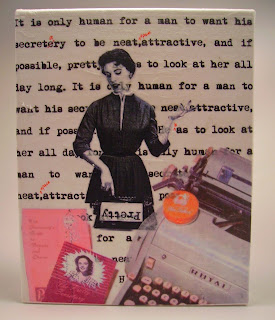 Here's a poem about a skill many of us learned after college, when it became clear that a degree in English wasn't going to get us much of anywhere. As I studied and pondered the role of "secretary," I imagined myself into an ancient temple, dedicated to the very first scribe--the God Thoth.

With a stenographic pad in my arms, I attended technical college, and hoped for an occasional view out of a corner office window, dressed in a Brooks Brothers suit, legs displayed in stockings and heels. Now, instead of a clever college girl, I  re-purposed to become a pink collar worker, the sort that was sufficiently well-educated to be able to appreciate at His Lordship's Ivy League jokes.

(Thought I'd put this in Courier, just for old times' sake.)

Walking in the dim cloisters
Of shorthand,
Chanting the hieroglyphs
We are acolytes.

You see us in the halls
Gregg in our arms like
A purple badge of courage.
Speed is our Revelation,
Schooled by a secretarial Diana
Who strikes our errors
Like the Moon.

You need love to conquer shorthand.
To achieve it,
You must live like a nun--
No late nights or serious boyfriends,
Just early mornings with your Dictaphone,
Hand and head
Battle
While you chase the speaker
Down storm sewers of aural memory.
Solitary you prepare
For that Gauntlet of Scribes--
That ticket to the office executive--
The five minute take.

Posted by Juliet Waldron at 1:16 PM