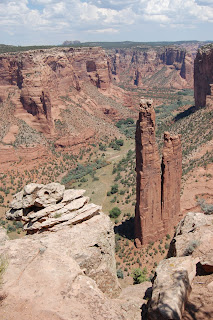 In researching my books for The Dreaming series, I have often been found following the paths of the Virginia Algonquian-speaking Indian tribes. Even though the Anasazi aren't in any of my books, on a recent trip to Arizona, I followed a similar trek because of my mission for studying the Native people. Anasazi is a Navajo word meaning "Ancient Ones." They were the ancestors of the modern day Hopi and Pueblo tribes. The highlight of my trip was a visit to Canyon de Chelly, which is located in the middle of the Navajo Reservation.

Roads wind along the rim of Canyon de Chelly (pronounced d'Shay) and nearby Canyon del Muerto. Overlooks provide stop offs to view the canyons and ancient pueblo ruins. Most of the trails are off limits unless one is accompanied by a park ranger or an authorized Navajo guide. One exception to this rule is the White House Ruin trail.

The trail is an improved Anasazi path from the rim that weaves down over 600 feet into the canyon. Part of the trail goes over and around sheer rock with magnificent views, and there are a couple of rock tunnels that give brief relief from the intense sun. Because the return trip uses the same path, it's important to bring water.

At the bottom of the canyon are two cliff dwellings. As with similar historic sites, at one time the ruins were left in the open, but too many tourists decided to take souvenirs, spoiling a hands on view for the rest of us. As a result, the ruins are now fenced off. 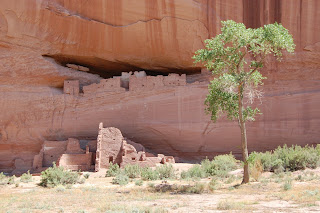 The dwellings date to approximately 1200 AD, and the Anasazi reached the upper cliff area with ladders on the roofs from the lower dwellings. Petroglyphs can also be seen. The Anasazi first began growing crops in the canyons about 2500 years ago. Unlike the Navajo farmers of today, the Anasazi didn't have horses or sheep because these domesticated animals, except for dogs and turkeys, were brought by the Spanish. Dogs were kept as guardians, pets, and to pull heavy loads. Turkeys were mainly kept as a source of feathers and as pets. They were also excellent for keeping bugs out of the gardens.

No one really knows why the Anasazi moved from the area, but tree ring dating suggests there was a prolonged drought. Today, tourists can remain in awe of the wondrous dwellings these people built. If I have a chance to go again, I'd love to take a tour from a Navajo guide. Not only would I learn about a more direct account of the Anasazi, including closeup views of other dwellings, but I would hear about the struggles of the Navajo too.

Kim Murphy
www.KimMurphy.net
Posted by Kim Murphy at 8:30 AM