Once known as Bru na Boinne, or Palace of the Boyne, was built in the Boyne river valley around 3200 BC, by a society of Neolithic people who were clearly well-organized, well-fed and dedicated to the task at hand. They wouldn’t have been able, otherwise, to utilize the manpower to construct this enormous monument , 249 feet across, 39 feet high and covering 1.1 acres of ground, consisting of alternating layers of earth and stone. The structure wasn't just massive, but, when first built,  it was also perfectly aligned with sunrise on the winter solstice. At the end of a passage which is 60 feet long, and lined with large engraved stone slabs, is the most famous feature, where there is a large room with three antechambers and a high, corbelled (and still water-tight) vaulted roof. 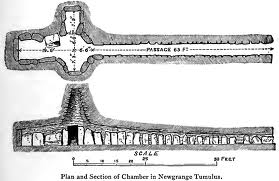 Here, on the solstice--through a roof box which was only rediscovered during excavations in 1967—enter the first rays of the rising winter sun.  (Irish folktales had always spoken of magical rooms within tumuli where, in the midst of eternal darkness, the sun shone...) When that beam of light penetrates the bee hive chamber, the winter sun touches the floor just below a great stone engraved with a tri-spiral, perhaps in honor of the ancient triple goddess, maiden, mother and crone. Spirals, symbols of our life path, carry us on our journey from birth to death to rebirth. The end is also a beginning, as a new seasonal cycle commences again. The chamber is illuminated for a mere 17 minutes, but, this year more than 30,000 people entered their names into a lottery to win a ticket to witness a marvel which has been occurring since before Stonehenge—or the pyramids--were built. 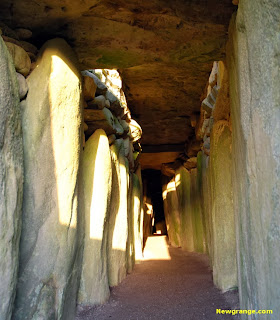 This winter Sun, seen by the ancient people as “new born” feels like a miracle to observers today, those of us who watch the skies and mark the seasons with festival, feast and meditation, much as our ancestors did. From that day forward, we know that the darkness will begin to recede, and the tide of light will come in again, until we again reach the summer solstice and the longest day. Crops will grow, lambs and calves and children will be born. No wonder the early adherents of an odd new eastern religion called Christianity, hoping for converts, were eager to conflate the birthday of their "dying" god with the associatively powerful symbol of the rising winter solstice sun. 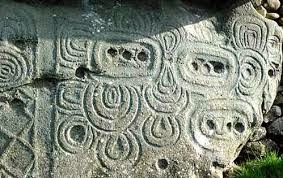 Posted by Juliet Waldron at 4:30 AM